Born in Brownsville Brooklyn, EBN grew up in the city over the 1970s and into the 1980s, experiencing all of the woes and greatness the city and it’s people had to offer. It was during the late 1970s. EBN first discovered the colorful wonder of graffiti through the eyes of Brooklyn artists who were getting up painting entire trains.

In the early 1980s, EBN caught the fever of getting up and went by the name EISN. It was an attempt to break free of the letters of choice or words and its letter letters flowed well together. He watched writers like OE, AS2, P13 introduce their initials as a means of mass self promotion and released the term being All City.

While attending the legendary high school of Art and Design 1982, EBN officially made his entrance into the scene. By this time graffiti artist before him were now in galleries leaving the trains to the next generation.  He joined the city funded group, ICRY, that promoted graffiti as an art form  in the hopes to get it off the street. It was here, EBN met up with Doc TC5, Web TC5, Staf27 and fellow school mates Abby and 2Cute. He spent those high school years bombing trains and working his way into TC5. Though short lived and most of his work lost, he made his mark in the 80son what was the last hurrah of hitting trains.

Today, EBN is currently working on a new series of paintings for shows as well as a private project  – Graffiti Architecture – which uses past experiences in graffiti with his understanding of its creative style and using all its 3D qualities. EBN has developed a style of design that is visually explosive in color and spatially functional as graffiti was back in the days. 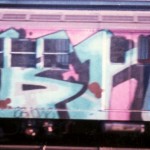 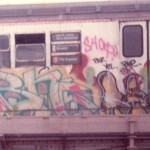 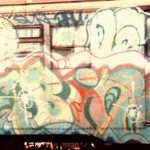 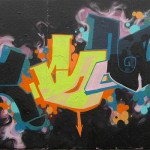 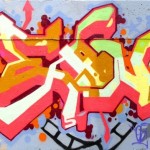