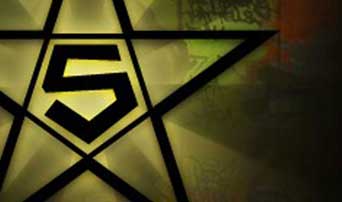 New York, during the mid-1980’s, was an amazing time for graffiti writers. Trains were crushed, styles were poppin, and TC-5 was one of the main crews at the forefront of the thriving graffiti scene.

The crew’s roots originate from the early 1970’s with The Crazy 5, which was a legendary crew from the Bronx with an impressive roster consisting of BLADE, DEATH, VAMM, TULL 13, CRACHEE, and later AJAX, COMET, SILVER TIPS, and MAZE. Keep in mind, in the earlier days of graffiti, most writer’s wrote for a few years then moved on. COMET and BLADE weren’t the average writers though, and crushed NYC Transit through the late 70’s into the early 80’s.

After most of the original members of The Crazy 5 had retired, in a somewhat controversial move at the time, COMET granted presidency of TC-5 to a writer from the Bronx named SEEN (or as some called him, L’il SEEN). SEEN reshaped the crew with some of the freshest writers of his generation such as BEAM, JUICE, DOZE, DOC, LADY PINK, as well as expanding the crew primarily from the Bronx into a true All-City force. As you can see from the flicks, TC-5 rocked the number and letter lines hard with some of the freshest cars pulled out on the NYC Subway system, and has continued to push the boundaries of contemporary letter and character styles over the past 25 years.

Seen receives crew from Comet of The Crazy Five while he was with Phade and Kems. Blade and Comet were creating a new crew called the Impact Brothers. The original members of The Cool Five starting out were Seen, Phade, Kems, Sound 7, Cey and Tank.

Seen paints with CASE(more frequent) and BUTCH through 1981.

Seen Kings the insides with coloured inks through 82.

A more advanced Seen partners up with up and coming Skeme.

The Cool Five is completely international.

The Cool Five has been able to produce hundreds of productions in promotion of the crew and in the promotions of events or services for groups, companies and institutions worldwide. We have lectured and shown the rich history of graffiti’s early days as well as spoken to and produce pieces in the current trends in graffiti today. If your organization requires graffiti or urban design services or information we are the go to group for you.

If you have any questions and/or service requests please reach out to us. Inquiries can be made by clicking here.

The Five is looking to partner with business who want to extend their brand with a strong strategic partner.

Reach out to us, we provide commissioned services.

The five provides lecture and design services on the origins of graf, our crew and talks about the richness of the graffiti culture..

The five has members with skillsets in a variety of disciplines from the art to full blown productions in all media.All you have to do is ask.

The Five, power and refinement
tcfive.com